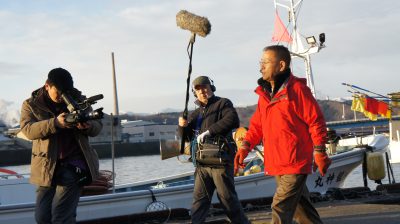 The Great East Japan Eartthquake devastated the coastal region of northeast Japan. The violence of the tsunami- a natural disaster far beyond anyone's expectations- brought such serious damages that the cleanup has been an overwhalming task. Three years have now passed. "What were we able to do on that day?" And stepping back, "What kind of preparation should we have made before that day?" For the sake of disaster prevention in a country plagued with natural disasters, what are the lessons that Japan must not allow to fade from memory?
In Miyako, Iwate Prefecture, Dr. Yasufumi Goto learned from the destruction of previous tsunamis, and built his four-story clinic as a disaster-proof building that can sustain a mega-earthquake as well as a 20-meter tsuami. Heavy-oil tanks and water tanks were installed, along with an emergency electricity generator on the roof of the clinic. On the day of the earthquake, Miyako was thrown into confusion, with power failures and the interruption of water supply, but the light continued to burn at the Goto clinic, which functioned as a shelter for about 200 people and was able to resume kidney dialysis treatment the next day.