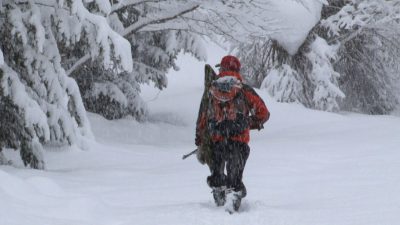 This documentary portrays 'matagi' (traditional hunters of the Tohoku region of northern part of Japan) living in Kaneyama Town, Okuaizu, Fukushima. In 2011, radioactive fallouts contaminated the nature of Kaneyama Town which is 130 km distant from Fukushima Daiichi Nuclear Power Plant. Matagi of Kaneyama Town hunt bears, while they have a significant role to convey the ongoing changes in the natural environment to human beings. After the Fukushima nuclear disaster occurred, people around the world started heading for harmonized symbiosis with nature. What is nature? The unspoiled nature is not always better - one of the matagi Inomata Akio teaches us the art of co-existing with nature. Matagi worship the Mountain God and hunt bears according to the rules of the mountains. Inomata conveys the spirit of matagi of Okuaizu to children today.